This year Okinawa’s annual awamori festival known as the Shimazake Fest was conducted online via Youtube and Zoom. I was asked to join and provide commentary about awamori. Initially I had several questions concerning which brands to work with, but it was explained that bottles would be sent to my home address prior to the event. This turned out to be true and the event was successfully completed yesterday, April 10th (it continues today but my participation is optional). The following post will be my follow up to yesterday’s discussion.

The event started a bit late, it seemed there was some technical difficulties that need to be ironed out. That was okay by me, though; I was running around trying to get the Blue Habu bar set up for on air production. For instance, I had to get a cooler box, ice, drinking water, tasting glasses, move a table, get an additional light, and figure out the best arrangement… Let’s just say that I had a lot going on behind the scenes. I just sat down to gather my thoughts when the event began to kick off.

The first group was from Higa Distillery, who discussed their new brand of Zanpa and gave suggestions on how to best enjoy it. The YouTube commentator was a former Awamori Queen so her participation was very professional and set the tone for the next commentator. Speaking of which, oh joy, I was up next.

After Higa Distillery, the torch was passed to Yaesen Distillery, based out of Ishigaki Island. A rep. from Yaesen introduced their brands: Green Bottle, Shima Urara, and Butterfly Pea liqueur.

The “Green Bottle” may not be the official name for this brand but it is widely known to be a term associated with the brand and it quickly produces hits when searching for it online. This product is barrel-aged, which gives it a nice sipping awamori, even at 43% ABV. During the Shimazake Fest, the presenter noted the aging process, and I asked if they used bourbon casks. The reply was that oak casks were used, specifically French oak. 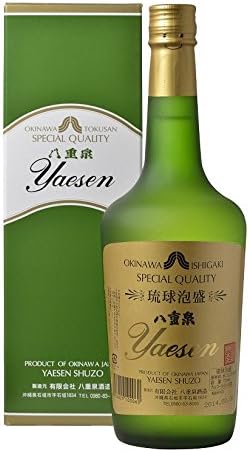 This makes it surprisingly sippable to be enjoyed neat, but it is also quite nice as a highball, which we shared tastings during our online meeting. I made sure to add a lemon slice in my glass. Yaesen Green Bottle has obtained a Superior Gold Award in the shochu category during the 2020 Tokyo Whisky & Spirits Competition.

Next up we tasted the Shima Urara. The presenter expertly explained that Shima Urara is made from rice grown in Ishigaki Island. This is unique to the brand because the majority of Ryukyu Awamori is produced using Thai rice. It is a long standing tradition that has endured for centuries. It seems Shima Urara will help Yaesen to prove that excellent, award winning awamori can be made with locally procured rice. I am excited to see the trend continue, and taste what else they come up with! Rice cultivation can be great for the local economy, provided they have enough people to work the fields. It is a labor intensive industry, from what I understand.

Shima Urara was suggested to mix well with water, a popular way to enjoy it at an izakaya in Ishigaki Island. I also enjoy it straight or on the rocks with a lemon slice. It is mellow and easy to drink at 25% ABV. The use of locally grown rice is a nice touch. It is a noticable difference when comparing other awamori at the same alcohol percentage. Shima Urara is also an award winning awamori, it received Gold Award during the 2020 Tokyo Whisky & Spirits Competition.

Lastly, we discussed Butterfly Pea liqueur. Okay, I’ll admit it. The first time I heard this, I thought, “Say what, now?” In preparation for the Shimazake Fest, I took a few moments to Google the term. It turns out, I have seen the butterfly pea flower often in Okinawa, just didn’t know what I was looking at. Now I can say that I also have a pretty good idea of how it tastes.

This liqueur is 35% ABV, sweet but not too sweet. It would make a nice cocktail, especially given the introduction of lemon juice makes the natural blue color turn pink. This was demonstrated during our online discussion yesterday. It would be interesting to experiment with this liqueur to see what other color combinations one could come up with.

The Shimazake Fest 2021 was a success overall. I attended Day One, and Day Two is going on as I type this post. No doubt it is going swimmingly, many great minds have put a lot of thought into making this event a go despite COVID. While it was my first time being broadcast on YouTube, I don’t think it will be the last. This was a good experience because I had an opportunity to taste new-to-me awamori and share my opinions in Japanese. I am not the best choice for professional insight or Japanese abilities but I appreciate the invite. It will serve as motivation for me to continue to study, practice, and learn. Kanpai!

We welcome your comments. コメントをキャンセル

Item added to your cart